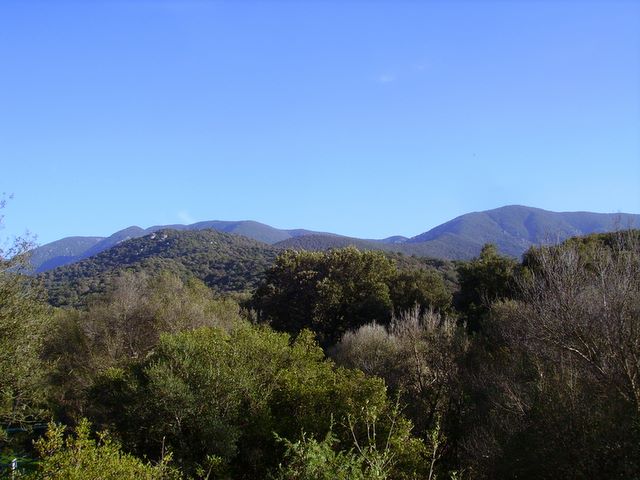 Pantaleo covers 4,231 hectares in the countryside of the municipalities of Santadi and Nuxis; with neighboring state property Forests of Pula, Monti Nieddu, Gutturu Mannu and Tamara Tiriccu merged constitutes a complex of over 22,000 hectares and is the heart of the Sulcis Natural Park.
Framing geographical and administrative
Province: Carbonia-Iglesias
Common: Santadi, Nuxis
Area: 4231 hectares
Complex: Pantaleo

General description
Inserted in the area defined by the law framework L.R.n. 31/1989 is, well 1600, a protected fauna oasis where the operating year ban on hunting. An area which exhibits high natural character, that man, while through its use and use, is able to “hold” and comply in time. To remember (those who want the post may have additional and more detailed information) that, from 1872 to 1951, Pantaleo has become home to forest industry and chemistry.

Geology and morphology
The geology is complex and varied. In fact there are rocks of various origins and from all eras that form deep valleys and ridges that give rise to the incredibly beautiful landscapes. Present outcrops of Sardinian Paleozoic basement, marked by metamorphic phenomena and intrusion of Hercynian granites, arenaceous or calcareous sediments of various kinds and shapes. The forest is then largely on granite, intercalated with metamorphic rocks, which in western presents limestone dolomite area.

Climate
Band lauretum: rainfall modulated in relation to altitude and exposure of the slopes. About 1000 mm per year in the best areas; limited even if common snowfall; prolonged summer drought.

Vegetation
The Sulcis mountains are covered by dense vegetation, mainly woods of holm oaks, mixed with stain and / or with the cork. Present limited areas in fustaie well holm oak.
Difficult areas remain occupied by bush and low bush.
Pantaleo boasts the largest existing holm oak wood in the world.
Present rare and / or endemic. Among the trees are mentioned among others the rate, the holly with bearing tree, the Etna broom, the three-lobed maple, elder, the hackberry, etc. Lots of shrubs and herbaceous, the peony has a certain importance.

Fauna
The habitat is ideal for many species, beginning with the Sardinian deer, fallow deer, wild cat, marten, fox, weasel. There are also many species of birds, mostly migratory. The birds of prey nesting site, in addition to the most common species, the golden eagle, goshawk, the sparrow hawk, peregrine falcon.

Projects and specificity
Among the buildings, some have been restored as the operational headquarters of the construction site and / or complex, others are going to be, harmonizing measures in synergy with other public and / or private persons
to be used for educational purposes and receptive tourism. They entered into several important initiatives such as Project Honey, the vineyard project, Cabriles the project, the design museum area.
Interventions interesting from the point of view of the trial and that will further enrich the existing one.

Pride Ente Forests and flagship of the site and its operators, the breeding of the Sardinian hare (Lepus capensis mediterraneus W.) which are present on average 150/200 individuals. Excellent results were obtained for the knowledge of the species, exclusive of the island and very little known, both for technical capacity to breeding, but also in terms of production, which has been directed in the past to obtain preambientati heads for restocking in freedom, sold for a fee and released, with good success, now since 1994. Today we want to integrate with a school and tourist educational path.

Within the perimeter of the construction site it was created a path of about 3 km where it is possible, starting from the service center, enjoy nature and reach the rest area with a table for consumption of snacks and / or meals called IS FIGUERAS. The trail is easily passable, it is also suitable for children and seniors. A concentrate of innovations that make the reality of Pantaleo interesting, full of proposals and, more importantly, wonderfully integrated in nature.
The proximity to many archaeological, natural sites in the area (of Is Zuddas Caves, Montessu tombs) provides further elements that enrich the offers for visitors.

Monuments
Pantaleo boasts the most impressive eucalyptus tree of Sardinia with more than 5.6 mt. in circumference and 27 meters high, planted in the late nineteenth century (figure 1). Do you admire in the square in front of the buildings of the complex. There are also the rarity as the myrtle plant, open to the inside of the enclosure of hares, with the trunk at the base of 50cm in diameter and a ‘height of about 4 meters. (Figure 2). But nature also offers other surprises, such as the presence of hybrid plants holm oak-cork