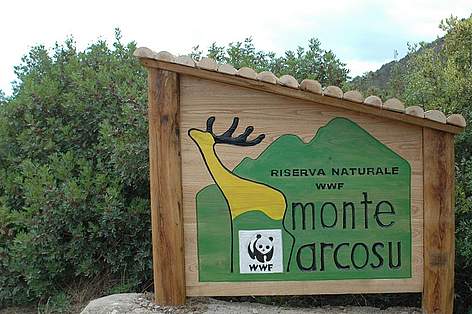 The forest complex Monte Arcosu – Piscinamanna constitutes the largest Mediterranean scrub forest of the entire Mediterranean.
The Oasis of Monte Arcosu is located within a Site of Community Importance (SCI ITB041105) in the municipalities of Uta, Assemini and Siliqua (Ca).

The Oasis area is 3600 hectares.
To enter the WWF reserve of Monte Arcosu, one step away from Cagliari, seems to live in a documentary that, finally, it is also a little protagonists. And ‘one of the few national parks most admired island in the Mediterranean, one of the last kingdoms of the Sardinian deer, a treasure trove of biodiversity.

They have contributed to the birth and growth of the ‘WWF Monte Arcosu:
– thousands of ordinary citizens, associations, CRAL, Panda Club, etc. that with their donations have enabled the purchase of this wonderful area and the preservation of one of the last populations of Sardinian deer;

– the European Community has for its part contributed 300,000 euros to the purchase of the first 3,000 hectares of the reserve of Monte Arcosu;
– Also worth mentioning the Province of Cagliari, which co-manages the reserve since 1997, the Region of Sardinia and the municipalities of Uta, Axis